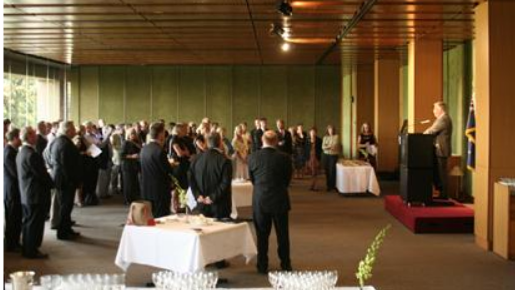 The second in a series of week-long regional food and wine showcases at NSW Parliament House in Sydney was held last month, with product from the Hawkesbury region, which is regarded as Sydney’s food bowl, being featured on dining room menus during the week . The showcase highlighted the quality and diversity of the region’s food and wine to media and other key influencers, and introduced Sydney providores, chefs, restaurateurs, food and beverage managers and retailers to leading regional food and wine suppliers.

The launch function attracted nearly 200 people. The Hawkesbury has historically been a food bowl for Sydney, dating back to the time of Governor Macquarie when the settlement at Sydney Cove turned to the Hawkesbury as a vital source for its food.   Today, the region continues to provide a dynamic food and wine culture, led by Hawkesbury Harvest Inc, which coordinated the Parliament House showcase as part of its commitment to supporting the long term sustainability of agricultural and food production in the Nepean/Hawkesbury.

The staging of quarterly, regional food and wine showcases in Parliament House is an initiative of the Department of State and Regional Development (DSRD), in partnership with the Department of Primary Industries and Tourism NSW, and is aimed at promoting and encouraging regional tourism, business and investment opportunities. Three showcases are planned for 2007, featuring other NSW food and wine regions.

Sorry, the comment form is closed at this time.